In an unusual start for this sort of update we are going to begin with the bad news.

As we mentioned in our last update the global shipping system is in a real mess at the moment. When it came down to our requirements, the arrival date was really critical and through no fault of their own, all of the shippers we spoke to could not guarantee we would get there on time.

So in consultation with the other teams that were planning on joining us, the decision was made not to risk it this year.

So although Ian and Harry with their wives will be going off to Bonneville this year, our vehicles will not.

We are obviously extremely disappointed with this and have already put a plan in place which should avoid this issue for next year.
This is not all bad news as this does give us some more time for testing and tuning.

After our last visit to Elvington our regular readers will know we had some handling issues and a quite serious oil leak.

Our plan was to fix these issues and get the car ready for the next two day event in July.

There was a meeting in June but as it was only one day, we were not going to drive all the way to York.

However, in the world of land speed racing to make it onto an event poster is a massive deal.

As such, we were honoured to be included in the adverts for this event. 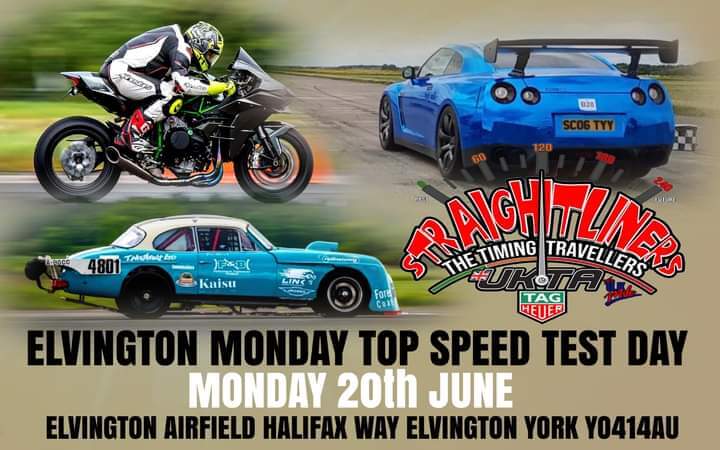 With this in mind, we once again removed the engine and managed to replace the rear crankshaft seal in fairly short order.

During the rebuild we also took the opportunity to recheck the engine breather system. As it turns out with the added air pressure within the engine caused by the turbocharger the existing system was holding too much pressure causing both gasket and oil seal failures.

Obviously, once we were aware of the issue, we considered and solved the problems.

We also, with the help of Rupert at Knox Motors took full use of his computer controlled laser alignment tools.

Surprisingly, considering that we had hand made the suspension on all four corners of the car, it was all amazingly close. But, not quite close enough and with the aid of the lasers and Rupert’s expertise we got all the wheels pointing in the same direction!

This was critical as Ian could now be confident the car would run straight and true.
So June 20th dawned dry and bright. The car found itself back at Elvington and Ian, this time with Pete Riley, Ian and Steve keen to run some faster speed 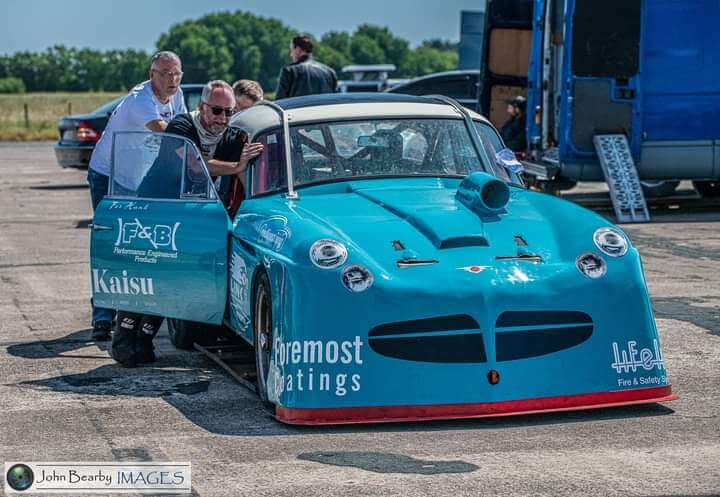 To add to the fun we were also joined by our good friend Andy Banfield.

Andy was going to join us at Bonneville and so is also looking to prepare his Triumph 750 for next years speed week.

Despite a few minor fuelling issues, Andy’s bike ran well and he got quite a few runs in throughout the day. 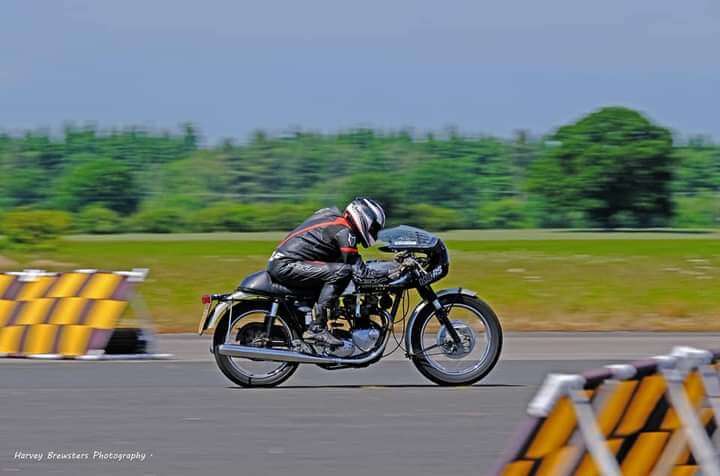 This time instead of the two kilometers the track was limited to just one mile. This meant we had to be a bit quicker out of the blocks and a little harder on the throttle.

Again, the entire point of testing is to uncover the next weakest point. This turned out to be quite dramatic on our first run.

Ian drove off quite spiritedly form the line but just after the half mile marker the water tank inside the car showered him in boiling water. He made it to the end of the run but the car was not running well.

The cause was not obvious and it was assumed that the car had just overheated.

After a quick chat with the paramedics and some time for the car to cool down we went off for another run.

The car was obviously not happy, so once again we called it a day and headed for home.
Once we arrived home we started stripping the car to try and find the root of all evil! 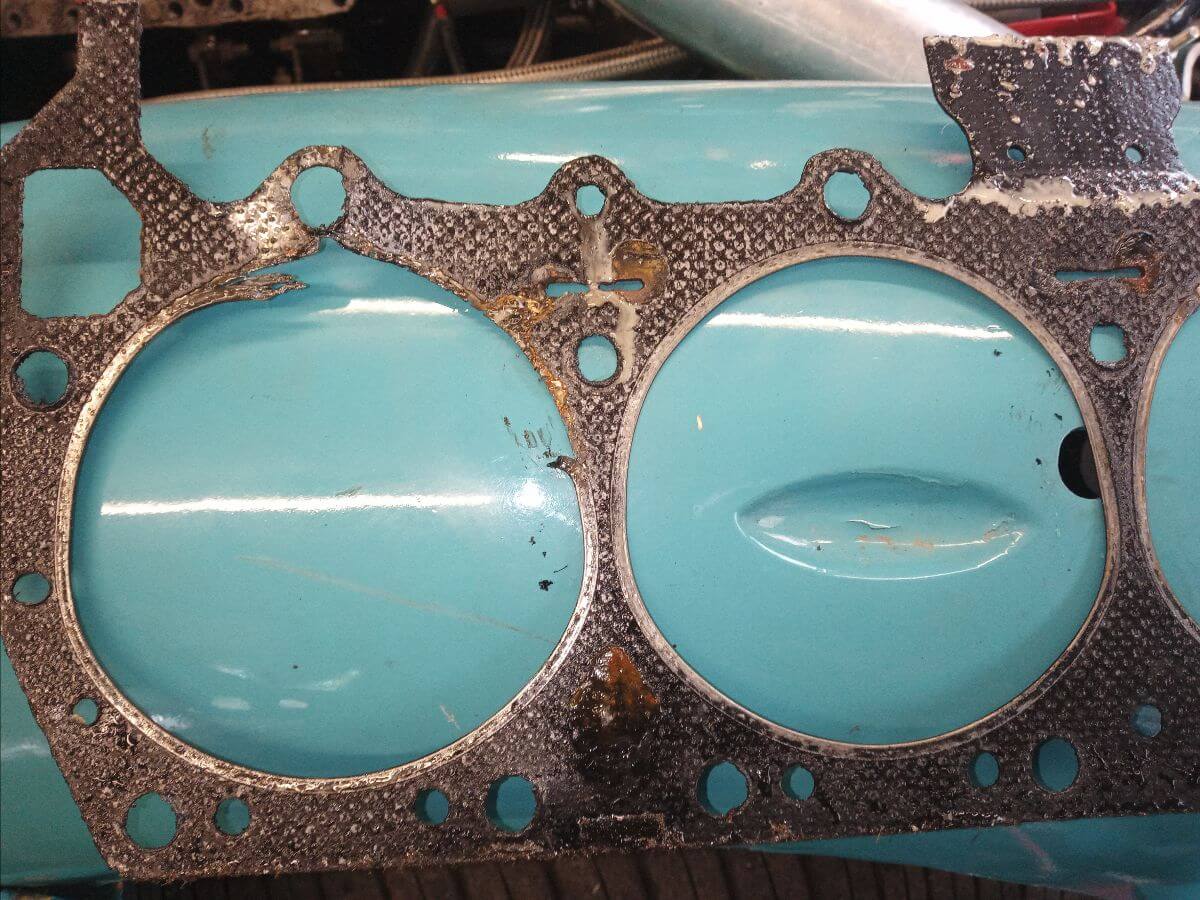 This cheap and nasty piece of composite and metal is one of our head gaskets.

The failure point is quite clear to see.

Causing this amount of damage 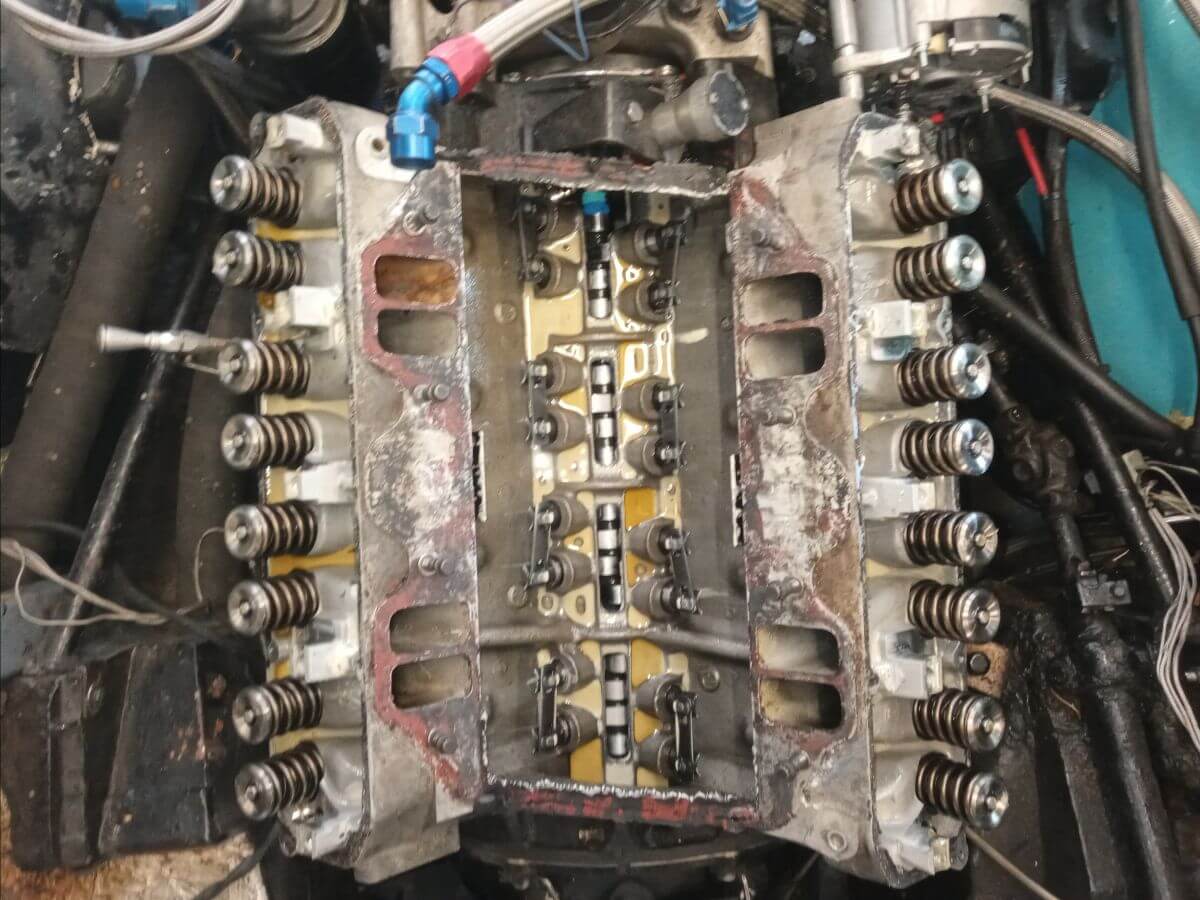 As is stands a good clean up and some new gaskets should see it up and running in no time.

The only other thing left is Ian has now decided we should have the water tank out of the passenger compartment of the car. Just in case!