The wonders of long distance shipping

For a short while it looked like our racing luck had followed us from the salt last year. We had this fantastic idea about getting all the larger items that we needed from the USA together in one place to save on shipping. Unfortunately in keeping with the project history we had failed to do all of our homework.

Bruce offered to get together all the items in San Diego. Having acquired us a really sweet replacement gearbox the rest of the larger items were shipped to Bruce’s workshop. A new set of tyres and the obligatory ballistic bellhousing.

Once all the parts were together we then looked around for shipping quotes, the prices we were getting were almost comical. We asked everyone we thought might be able to help to no avail. Eventually we settled on the least ridiculous.

They asked us whether the pallet was stackable, initially the answer was no until they decided this added another fifty percent to the cost so we decided it could be stackable. In Bruces words they could put a car on top of the pallet by the time he had made it stackable. 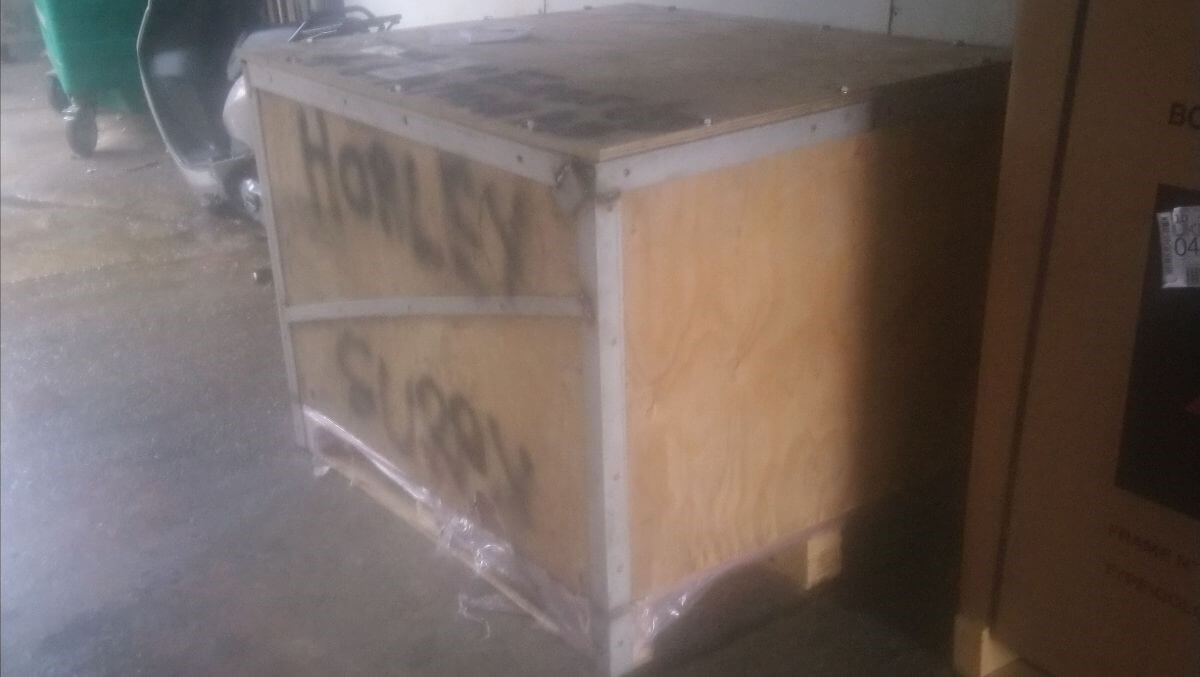 Unfortunately when the delivery order was placed nobody noticed that the delivery company had been given the wrong pick up address. When they turned up at Bruce’s house as opposed to his workshop the omens were not good.

Considering the relative time differences, the next morning, as soon as we were aware of the slip up we got straight on to the shipping company and corrected the collection address. Initially the collection was to be on Thursday but by the time the package was actually on a truck it was late Friday.

As we had done this ‘on the cheap’ it was assumed that the delivery would be via boat and therefore would take a couple of weeks. Ian was stunned when he got a call to say that the pallet had arrived at work on the Monday (his day off)!

Our experience of delivery companies is that things rarely go as planned, but for things to run this efficiently and arrive weeks earlier than expected was a wonderful surprise. 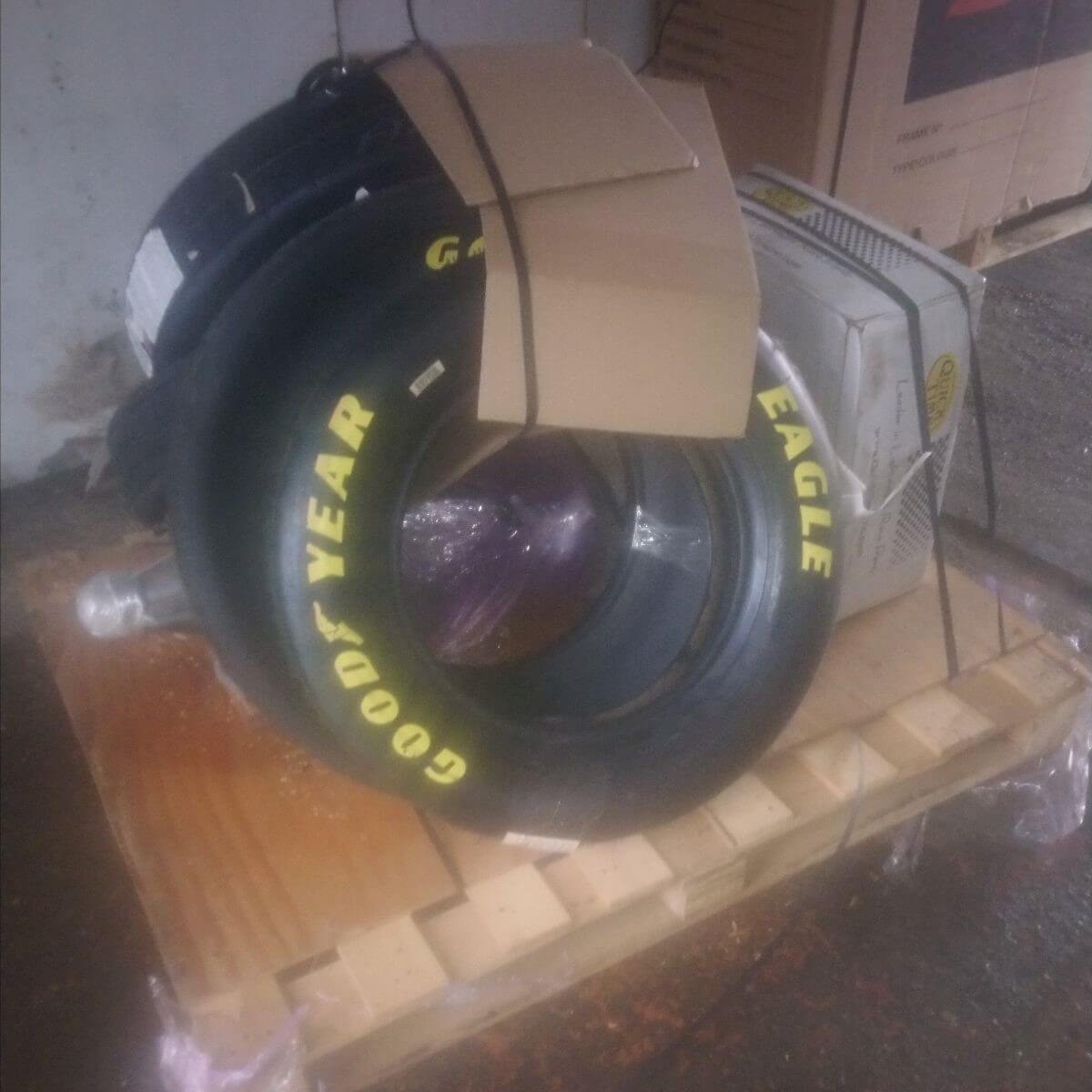 Now that the gearbox has arrived we took all the necessary measurements and could the order the final parts for fitting. This meant trying to count the splines on both the input and output shafts and accurately getting the diameters of the shafts.

Armed with this information we could then source the new clutch plate and a very heavy duty yoke for the propshaft.

When the order was placed a few parts were out of stock so once again we thought there would be another delay. Amazingly, ten days later everything turned up! 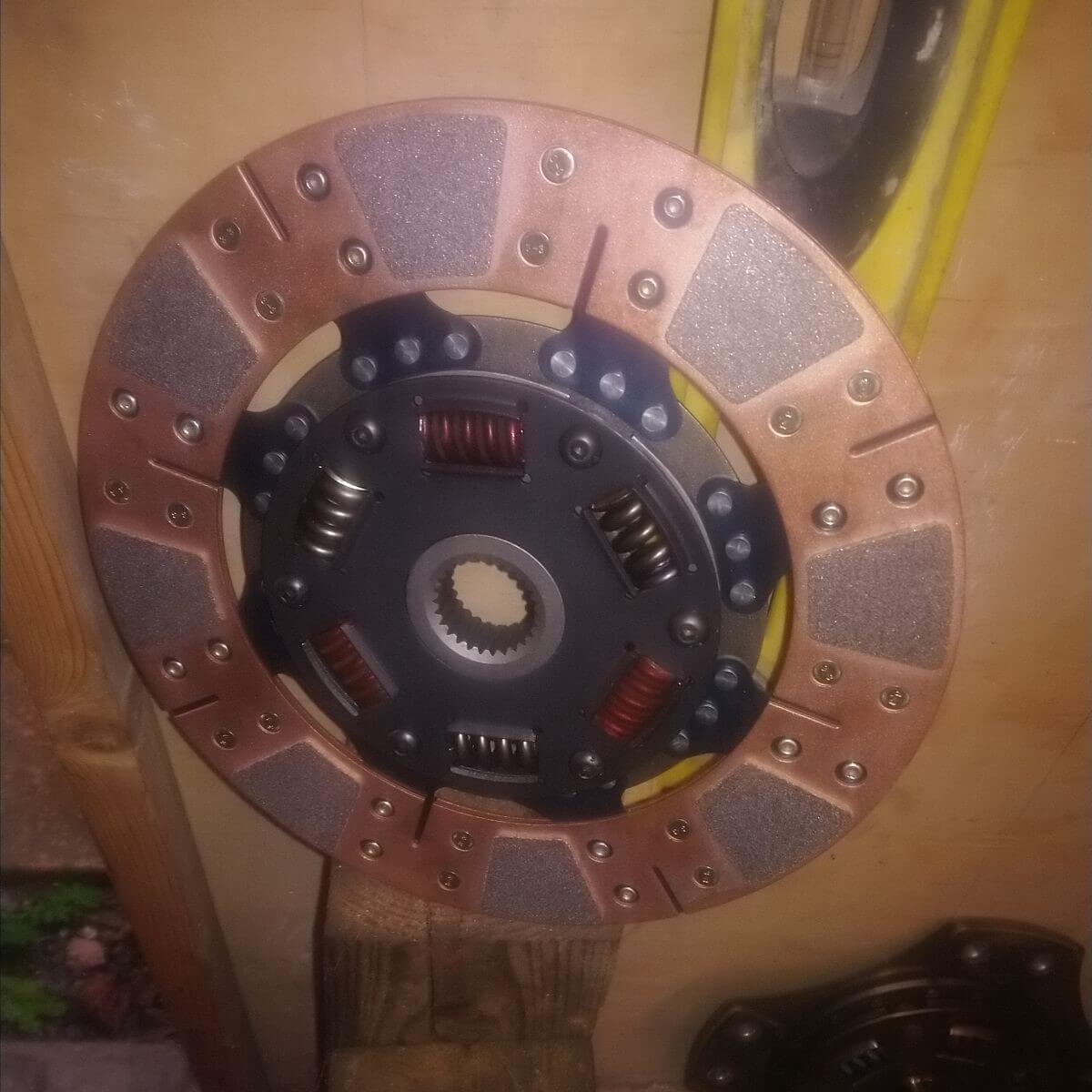 We were particularly excited to receive the tyres. Basically as a team we are children and so anything with this written on it must be good! 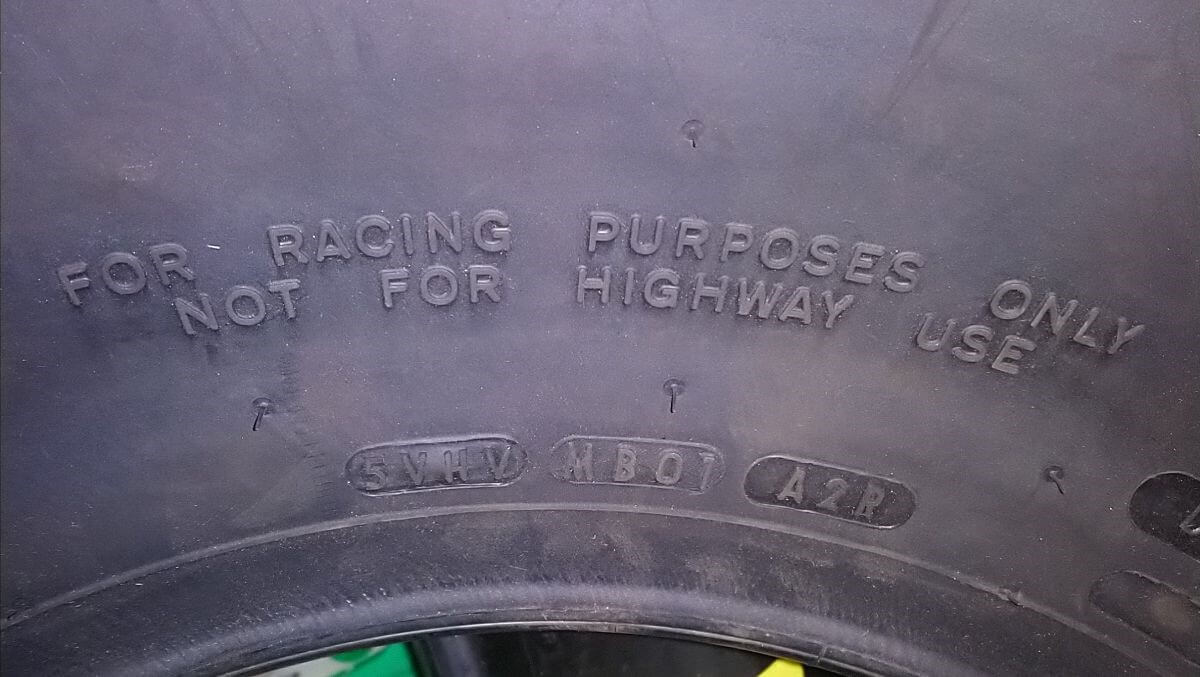 Once again we called on out friends at North Hants Tyres and Wheels. They once again went well out of their way to help us by fitting the new tyres to the new rims they supplied to us. These must have been particularly hard to fit but even though they had not supplied the tyres they did it while we waited. 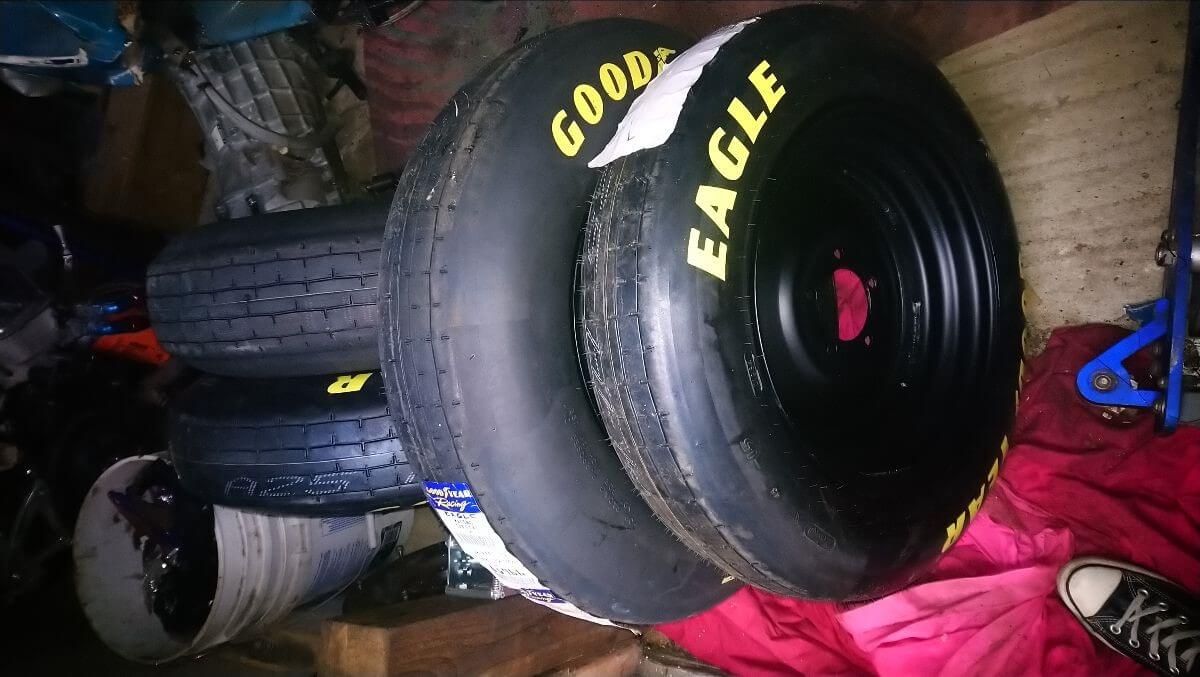 With our assumed down time, only spoilt by the early arrival of the new equipment, we decided to correct one of the issues picked up by the tech inspectors last year. As the roll cage was fitted a number of relatively large holes were cut into the car for the tubes to come up from underneath.

If you watch the videos you can see that at certain speeds the car turns into a snow globe inside. With these holes filled hopefully that will be reduced.

So with this in mind Harry forced himself into the car and then spent nearly five hours welding and filling all of the holes. 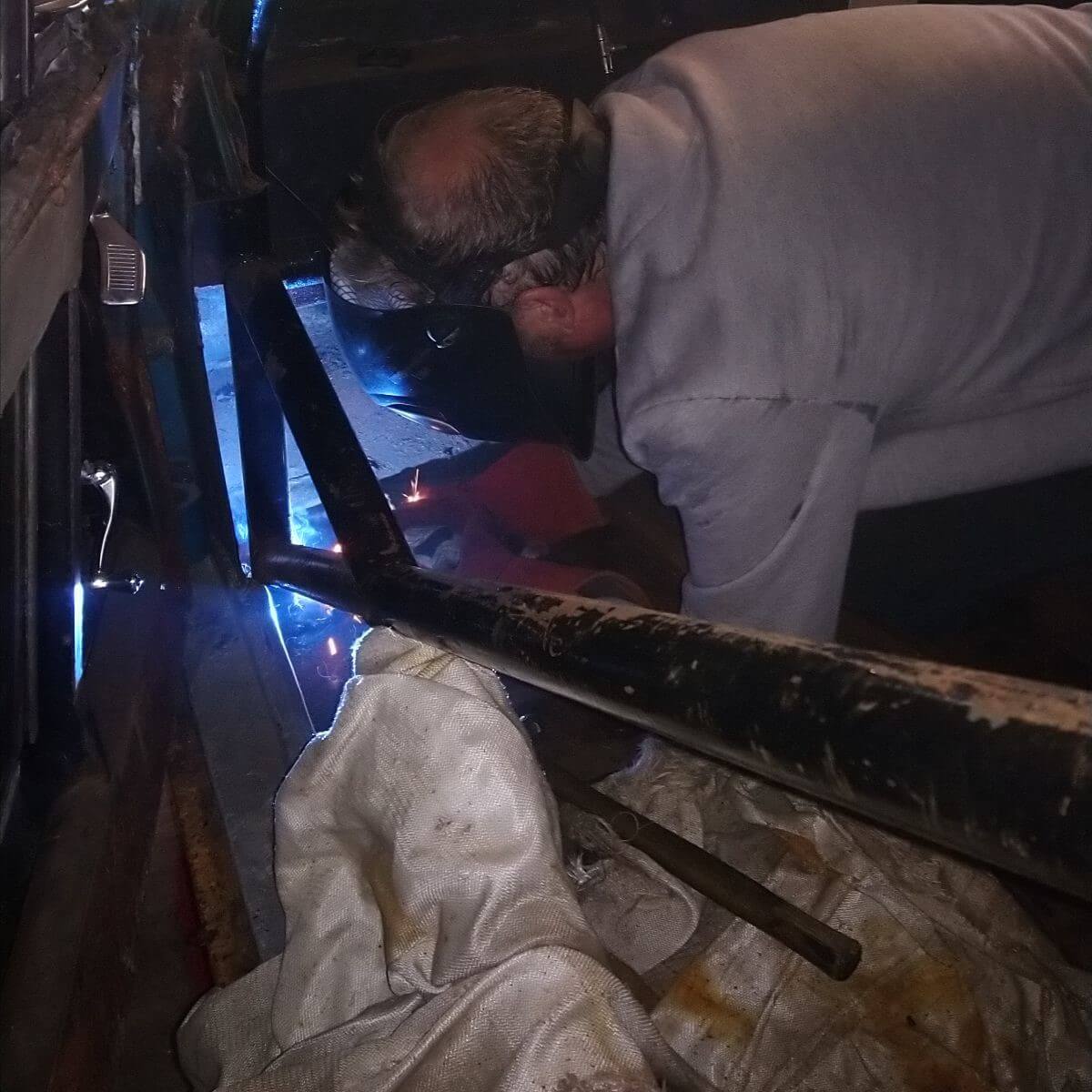 The world of motorsport and land speed racing has recently been rocked by some high profile deaths. Both Anthoine Hubert and Jessie Coombs were taken far too early.

During the World of Speed event at Bonneville there were also a couple of very high speed accidents which have resulted in life changing injuries to Rob Freyvogel and Lee Sicillio.

As a team our thoughts and prayers are with the friends and families of those affected by these awful events.

We are fully aware of the potential risks of what we are attempting to acheive and will take any lessons to be learnt from any of these tragedies on board. We have also redoubled our consideration to all of the safety features of our project.