Since our last visit to Utah in 2018 whilst we have been busy showing and working on the car, we have also been busy researching ways to make the car faster, safer and more reliable.

Amongst the updates we have already carried out, as our regular followers will know, we have replaced the ECU, gearbox and clutch assembly. All of which gave us trouble last time out. We have also, on the advice of the tech inspectors, replaced our tyres with specific racing items.

However a lot of time has been spent researching aerodynamic models and speaking to other competitors to make the car stable at our projected speeds. Luckily (or unluckily) we never found any instability in the aerodynamic side of the car. Obviously we hadn’t reached the speed where the original design began to become unstable. As a result we still have no idea what could happen when this point is reached. Our plans to just push through it relying on Ian’s (dubious) driving skills and more likely an awful lot of luck are unreliable, to say the least, so we have decided to use some science and engineering.

The upshot of this is some major aerodynamic changes to the car. 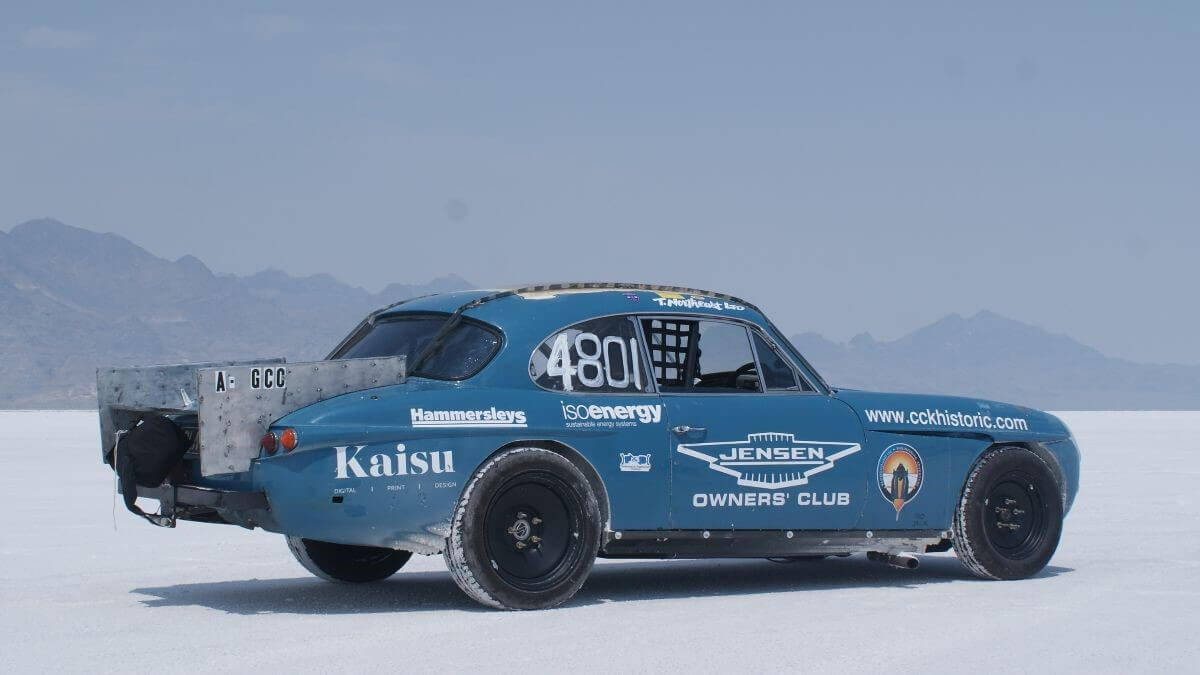 As can be seen in the above image, with the exception of our rather subtle rear wing, (you may not be able to pick it out, it’s the silver bit with the odd letters on to the rear of the car) the car is exactly the same shape as it was when it left the factory.

As a testament to the original design, which came from a piece of paper and not from any wind tunnel testing. The genius of Mr Neale showed when we exceeded the design speed of the car by over 20 mph without finding it’s limits.

As we are planning on really stretching these figures next time out, common sense has prevailed. The biggest visible difference will be from the front. We are building a large air dam which will extend the front of the bonnet all the way to the floor (well nearly, 1 1/2 inches from the floor), side skirts, a formula one style rear diffuser and a flat floor with some Richard Noble, Ron Ayres inspired ducting.

The front air dam which solves one problem then creates another. We have been researching lots of ideas and the simplest is to have a NASCAR style flat front, this will deflect almost all of the drag inducing air round or over the car. However for this to work efficiently for our purposes it shouldn’t have any holes or vents in it.

This simple little statement creates huge cooling issues for us. Luckily there is a relatively simple solution. To cool the engine, rather than using a conventional radiator we plan to increase the amount of coolant in the system. This extra capacity will reside in an extra tank and be cycled using an extra water pump. This system will work because we are only running, all be it flat out, for a relatively short time.

The other cooling issue surrounds the intercooler for the turbocharger. The cooler the air going into the engine the more power you can get from it. So keeping that forced air cool will increase our potential top speed. The solution to this is even simpler than the water, we will house the intercooler in an ice tank which will be refilled before each run. 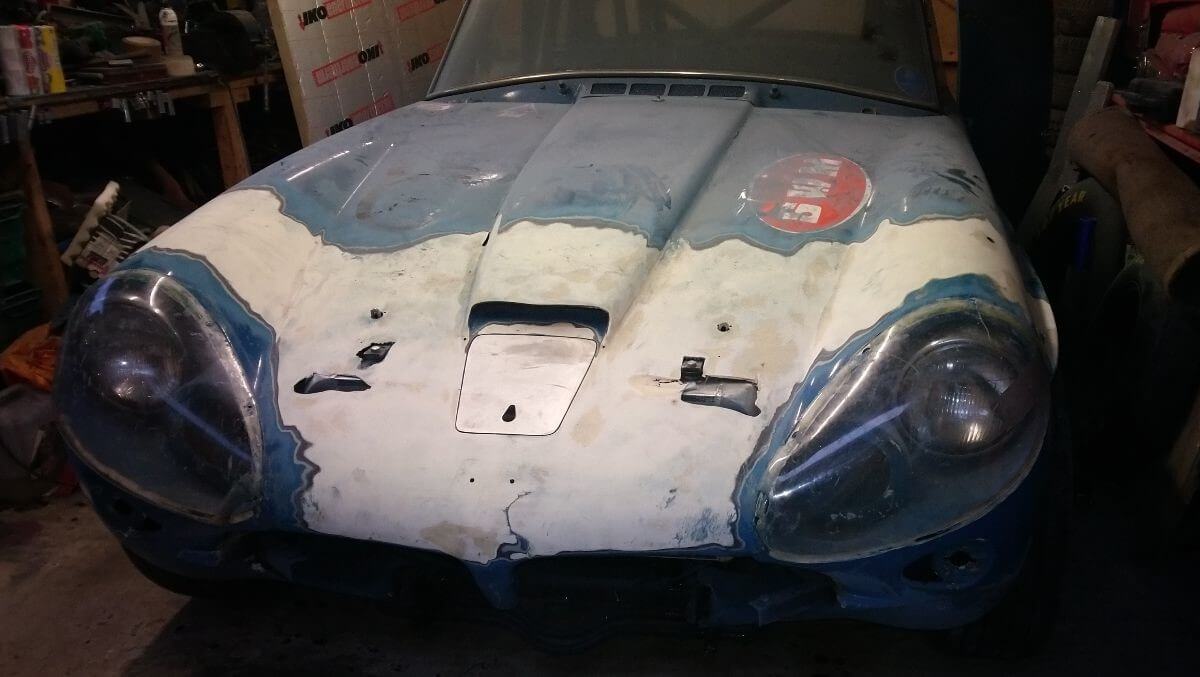 As we did around this time two years ago we called upon the skills of team percussionist and artistic plasterer Mike Warren.

Before his arrival, we set the shape of the top of the front of the car by removing the paint and smoothing out the worst of the lumps and bumps.

Once again Mike had foolishly agreed to give up his well earned Christmas holiday and spent hours in a cold workshop making a model of the front air dam we need. 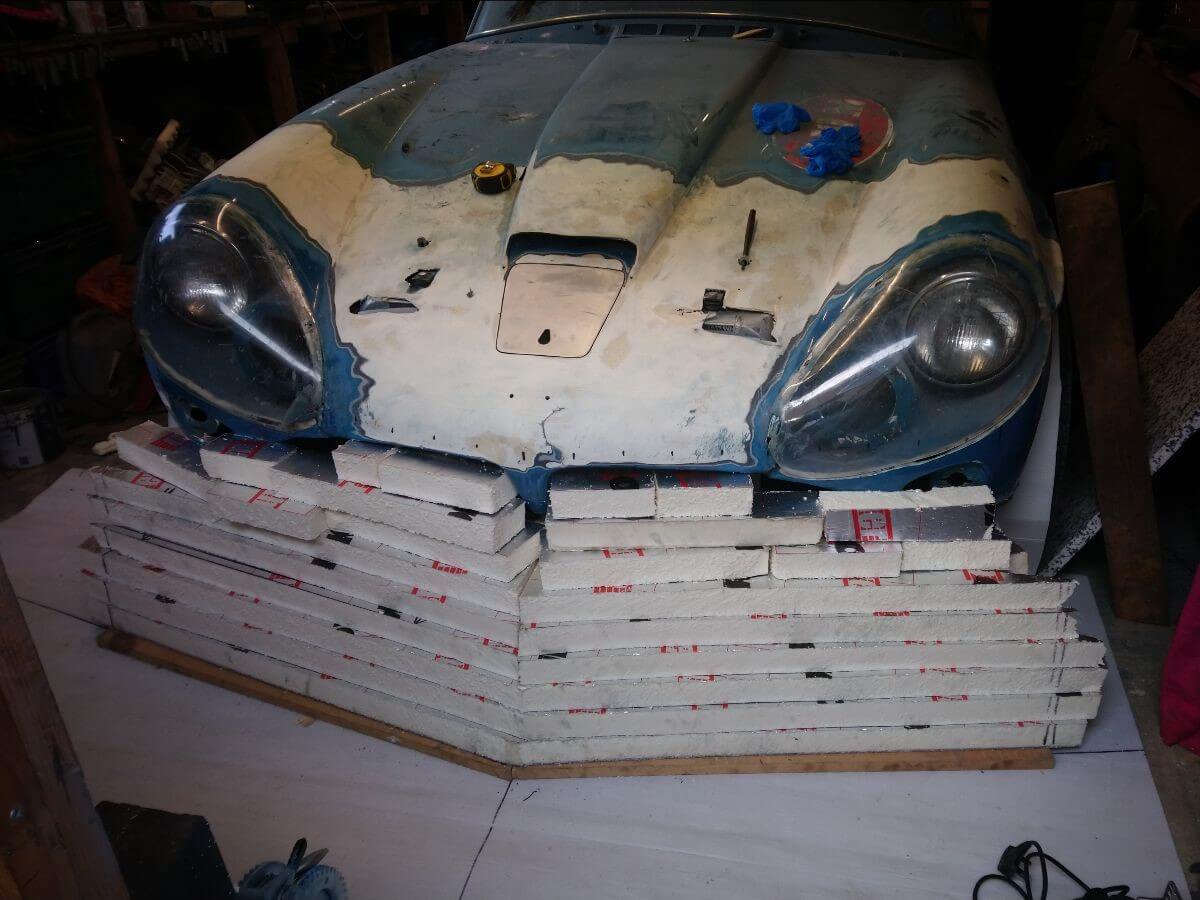 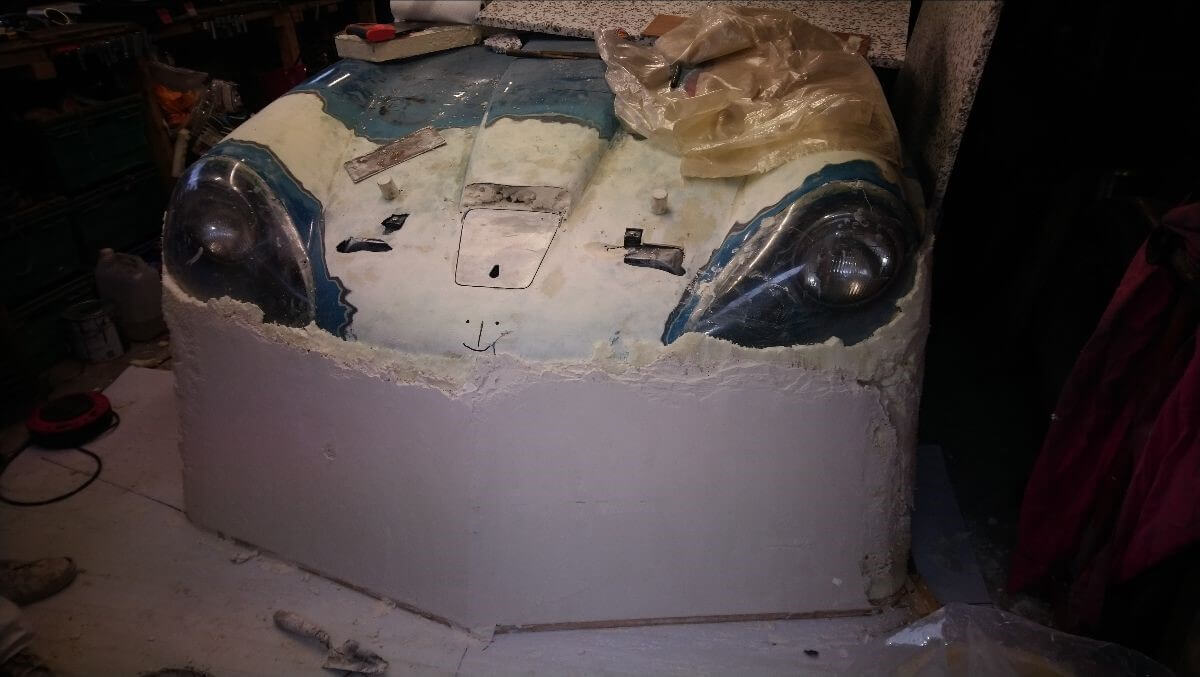 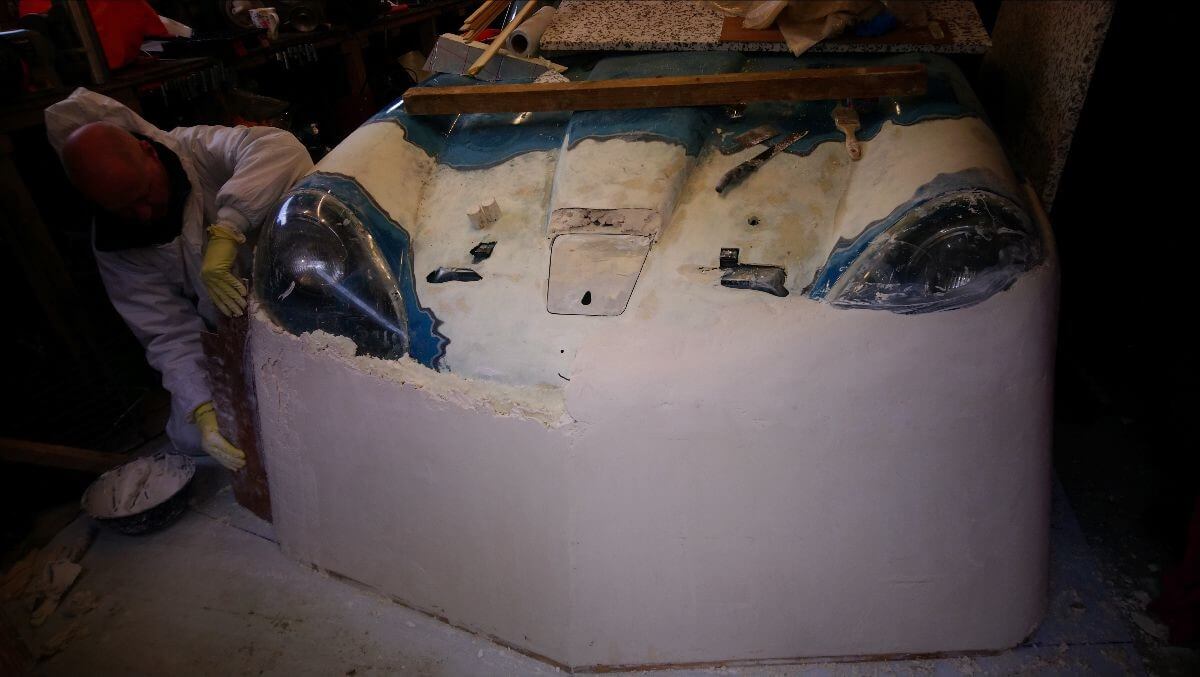 This is all incredibly painstaking work and all of the complicated curvature has to be created and finished by hand. To get to this stage took the best bit of four days and this is only half of it!

Once the ‘model’ is finished then we need to cast a mould from the finished shape. 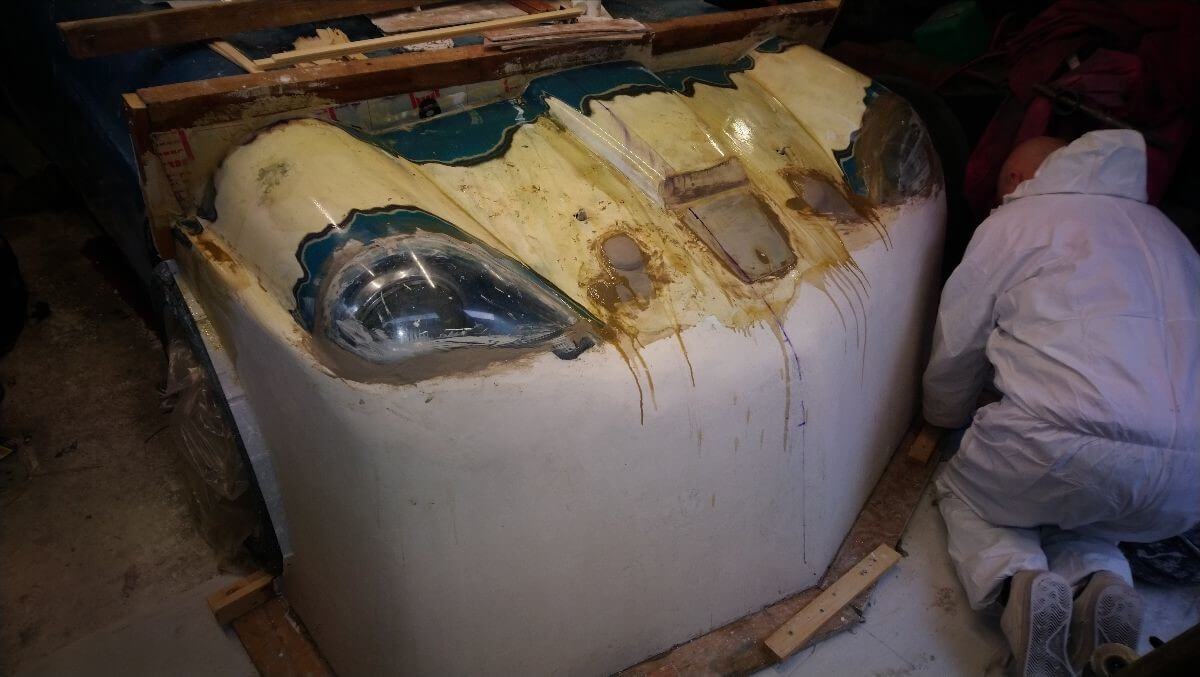 Once the shape was complete a releasing agent was painted all over the area and work began on the mould.

Pieces of wood were used to stabilise and strengthen the outer edges.

Then work on the mould began with yet more loads of plaster of paris and hard work.

Mike really is a magician and creating this from nothing really is nothing short of miraculous. 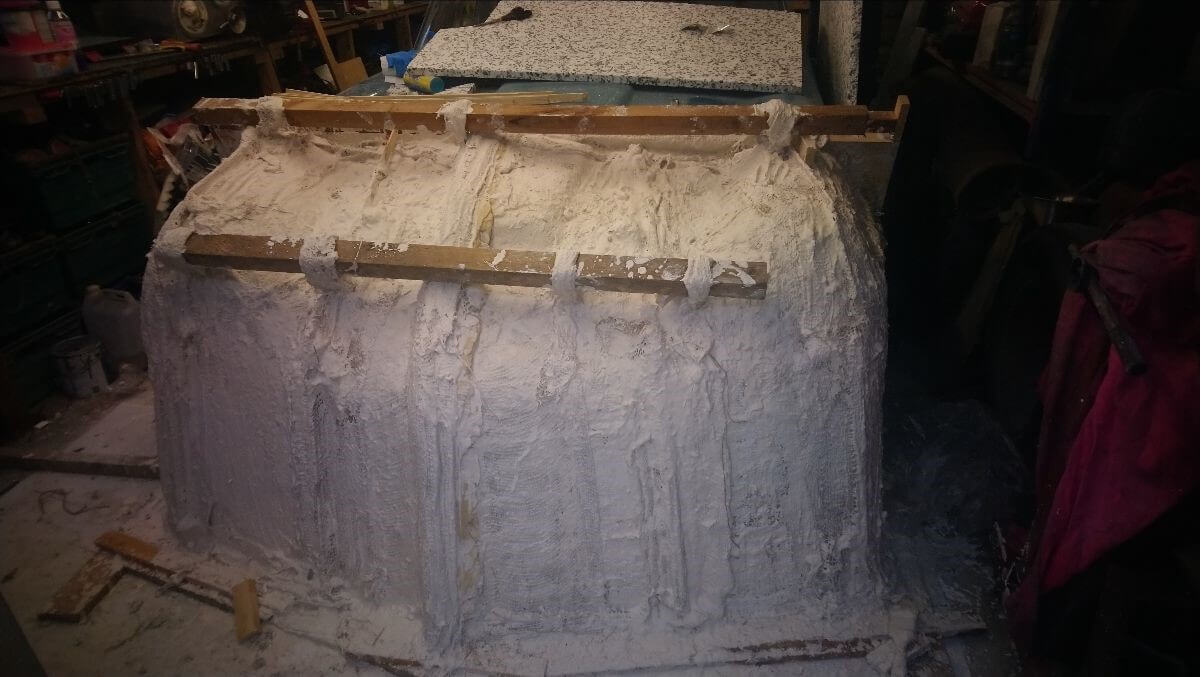 After allowing a few days for the plaster to set as hard as possible, we then removed the mould.

This was a crucial moment as how the mould came off would determine whether we could get on and start manufacturing our new front end and indeed our racing bonnet.

Thankfully the mould released in very good condition and while there was a liitle bit of making good to just smooth out some edges we began casting a new front of our car. 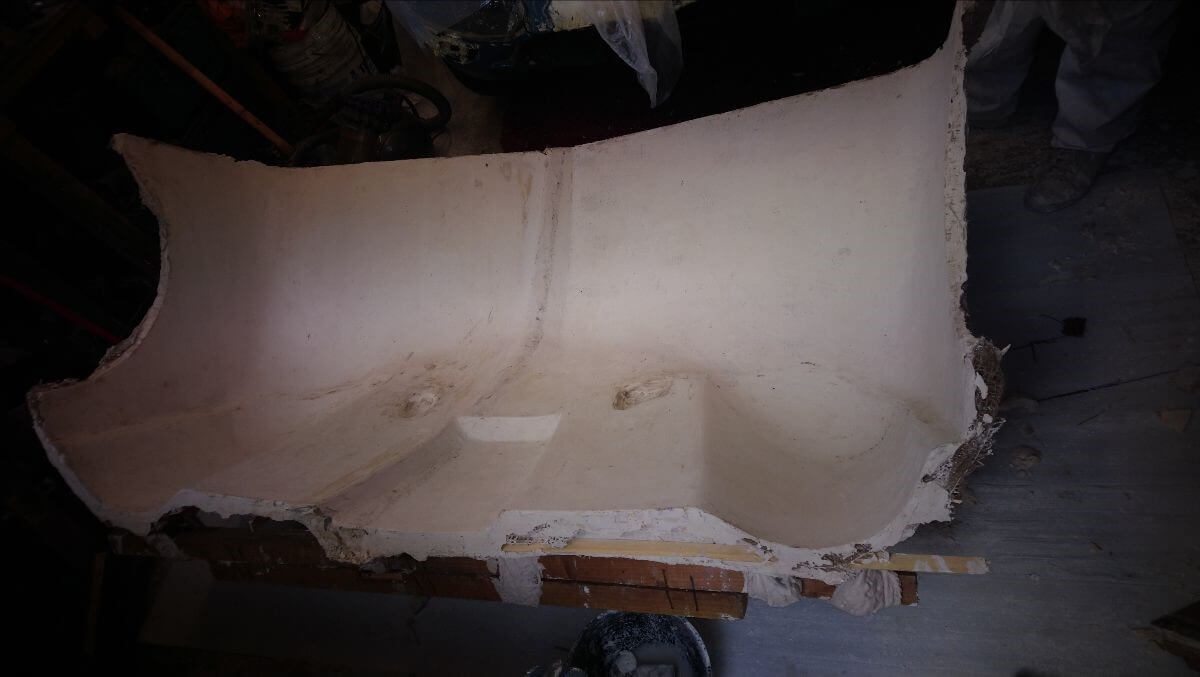 At this point we released Mike from his responsibilities and Pete once again stepped up. We made use of his extensive all be it not relevant experience when it came to fibreglassing. He has no more idea than the rest of us so we cracked on! 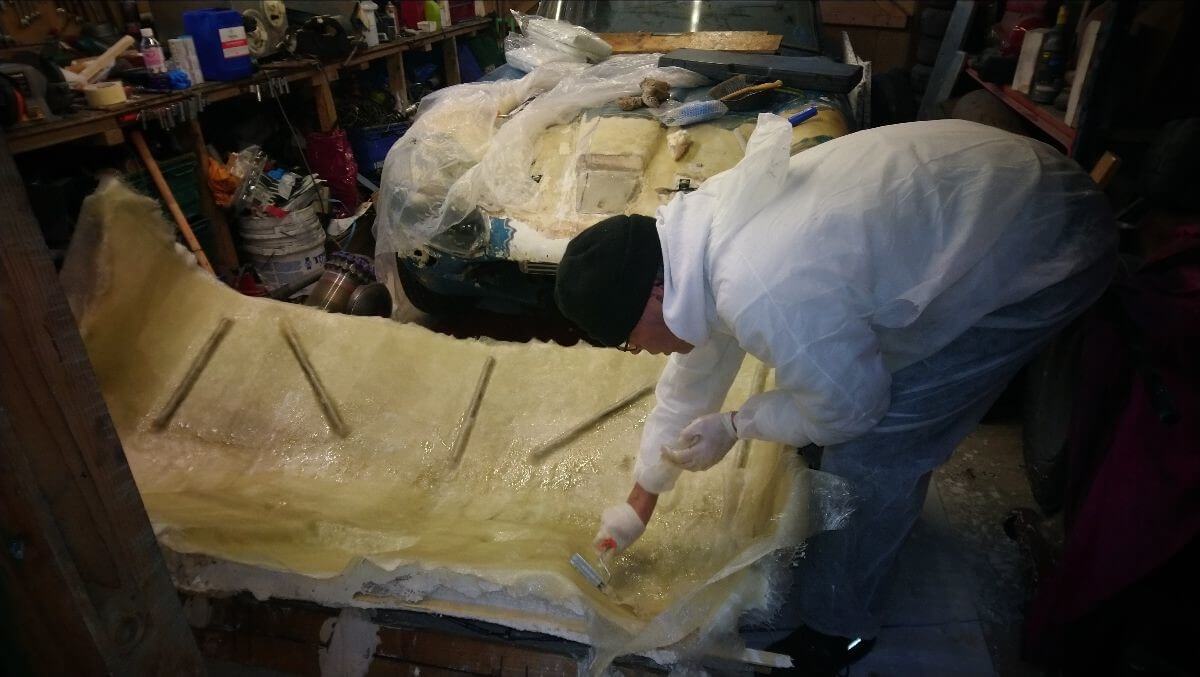 A few days later, bearing in mind that it is January and the temperature is not playing ball when it comes to fibreglass we managed to get our new ‘nose’ from the mould. 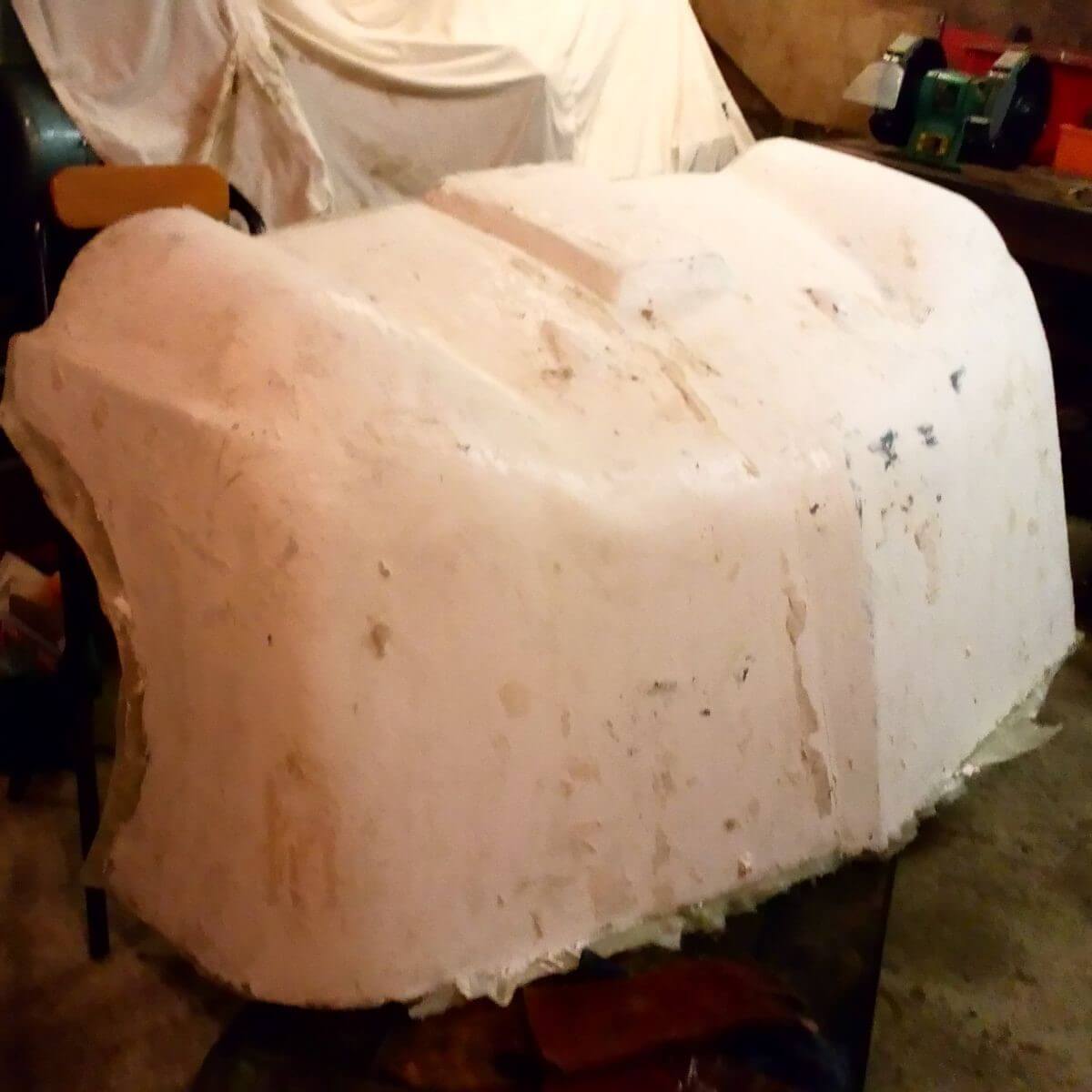 After a bit of cleaning up the next step is to join this to the exisitng bonnet. That is our next adventure.

As you can see work is progressing well and we are on target for this year’s adventure.

We have moved forward the timing of our aero plans as we have been invited to show our car at the presigious race retro show near Coventry and we want the car to look at its best. At previous shows we have gone to great lengths to show the damage that the salt has done to the car, this time however we are showing the car in our as close as we can 2020 race trim.

If you get the opportunity please come and see us at the FBHVC stand, we’ll be there all weekend.