Ian Northeast 12 August, 2019
We've finished showing off, so we're back getting her hands dirty!

July turned into a very hectic month. We were very proud to be asked to help promote the Brake horse power car show in Chelmsford last month. This involved showing the car inside a very busy shopping centre on a Saturday. It was very interesting talking to people that weren’t necessarily there to see cars and seeing their reactions to our project. Mostly positive, some incredulous. 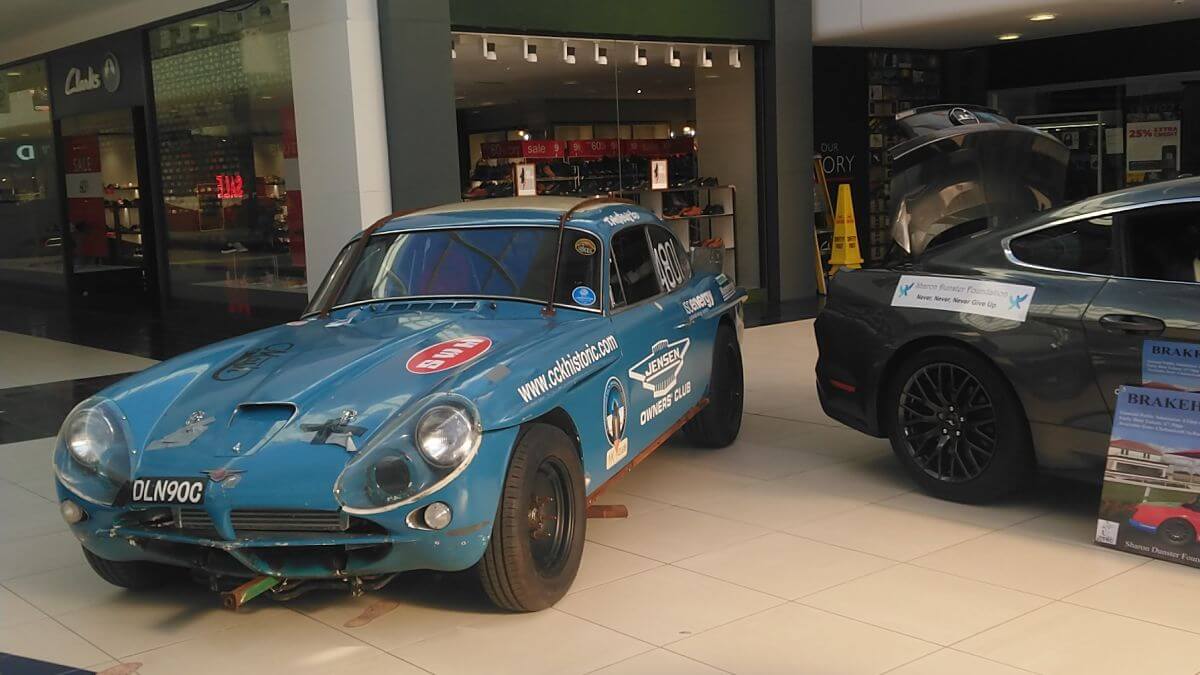 The day after we were invited to a local car show on the banks of the river Thames where up to 1000 classic and intersting cars meet up once a year. A great show with a very friendly atmosphere and once more very positive reactions to our project and the then upcoming show at the racecourse.
We were particularly pleased to meet up with one of the amateur photographers we first met on the salt last year. His enthusiasm for land speed racing has not abated at all. 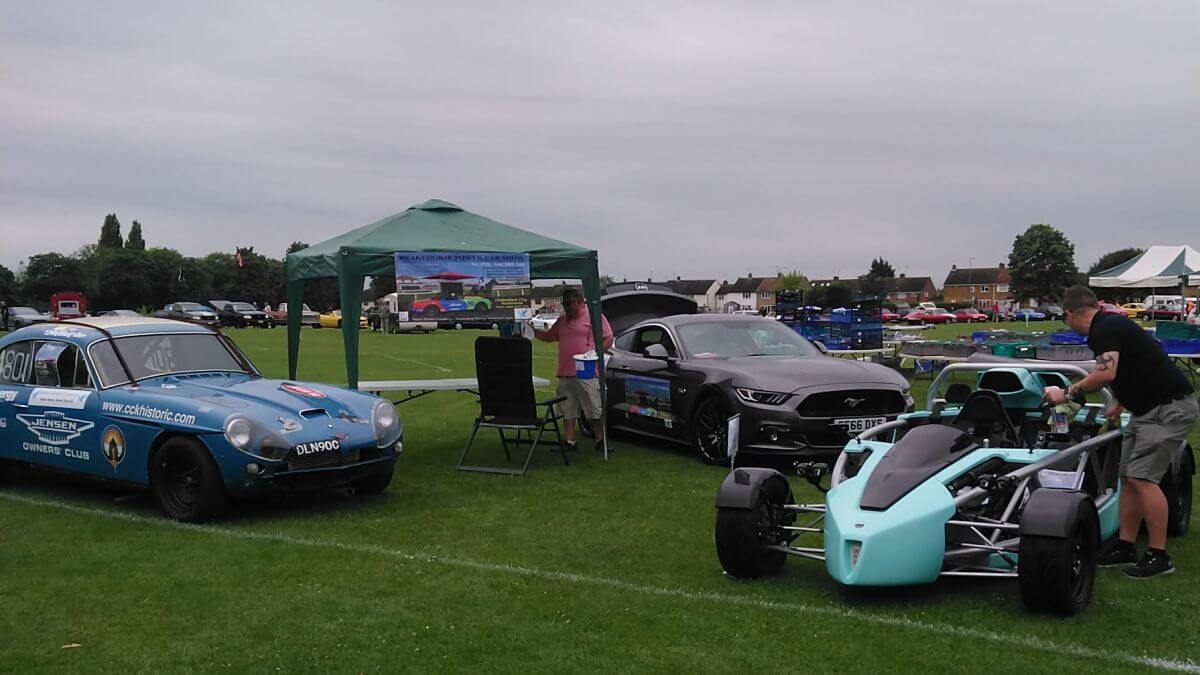 As the promotional weekend was so close to the actual event it seemed ridiculous to bring the car home, only to return to the same place two weeks later. As a result we arrnaged with the organisers to find some local storage for the car in the Chelmsford area.

This had a fantastic side effect which made the whole team so proud of all our achievements. The car was being stored at the home of the son of the organiser, and his son during the week had been asked to do a ‘show and tell’ in front of his school. We were so proud that he chose us to talk about. As one of the aims of the project was to inspire others, we’ve really got this bit right!

The Chelmsford Brake Horse Power Show was a tale of two days. Due to unexpected work commitments our arrival at the show was delayed until quite late on the Saturday. Alas the weather gods had seen fit to drench the entire site for the whole day and as a result attendence was poor.

This was made up for in some part by the evening dinner and reception which was a resounding success. Richard Noble gave the after dinner speech,despite the all too familiar technical problems with his A/V aids, he was very entertaining as always.

Not long after, another friend of the project Ian Glover became the charity auctioneer and managed to raise a significant sum thanks to the generosity of the attendees and the charities supporters. 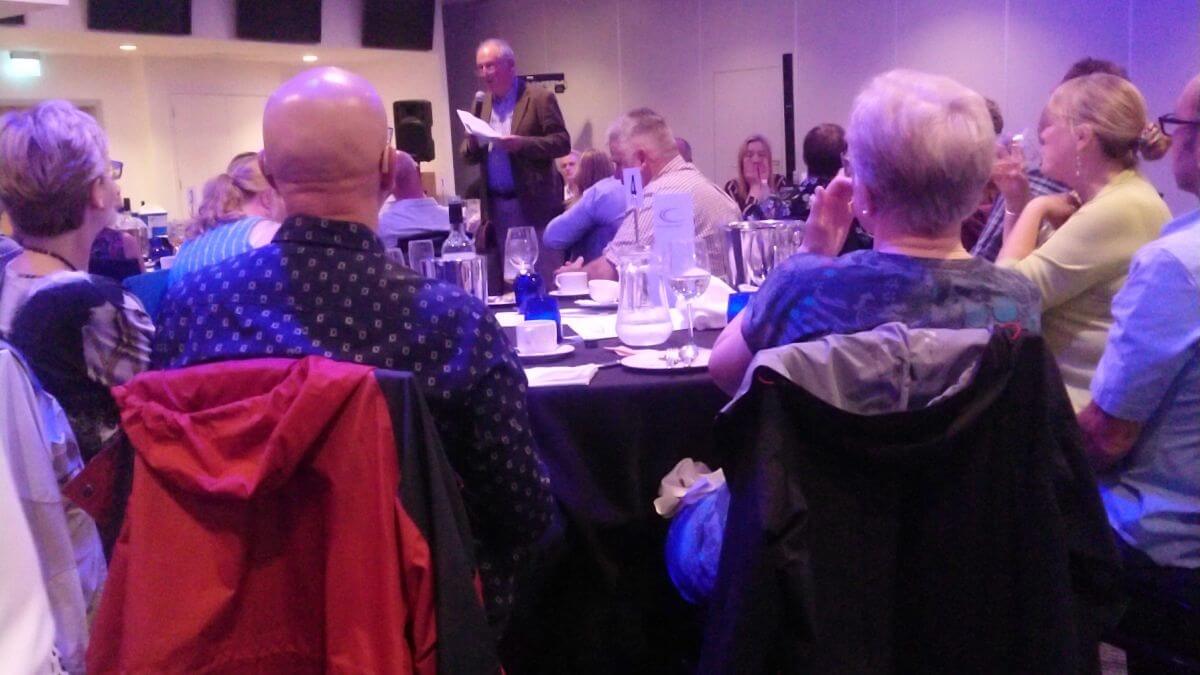 Sunday was a much better day, and depsite the show not getting the gorgeous sunshine it deserved, the rain held off and before too long the queues of classic, sports and interesting cars were streaming into the event. The relief amongst the organisers was visible and everyone had a really good day.

We all took the opportunity to make new friends and contacts. The owners of the Demon Drome Wall of Death were particularly interesting as they have a 1912 Indian motorcycle and dreams of racing it on the salt, so we may have another vehicle joining us next year.

It was also great to meet up with some of the famous Essex boy racers. Rather than sneering at our old car they were keenly interested in our efforts and hopefully inspired to do something unusual. 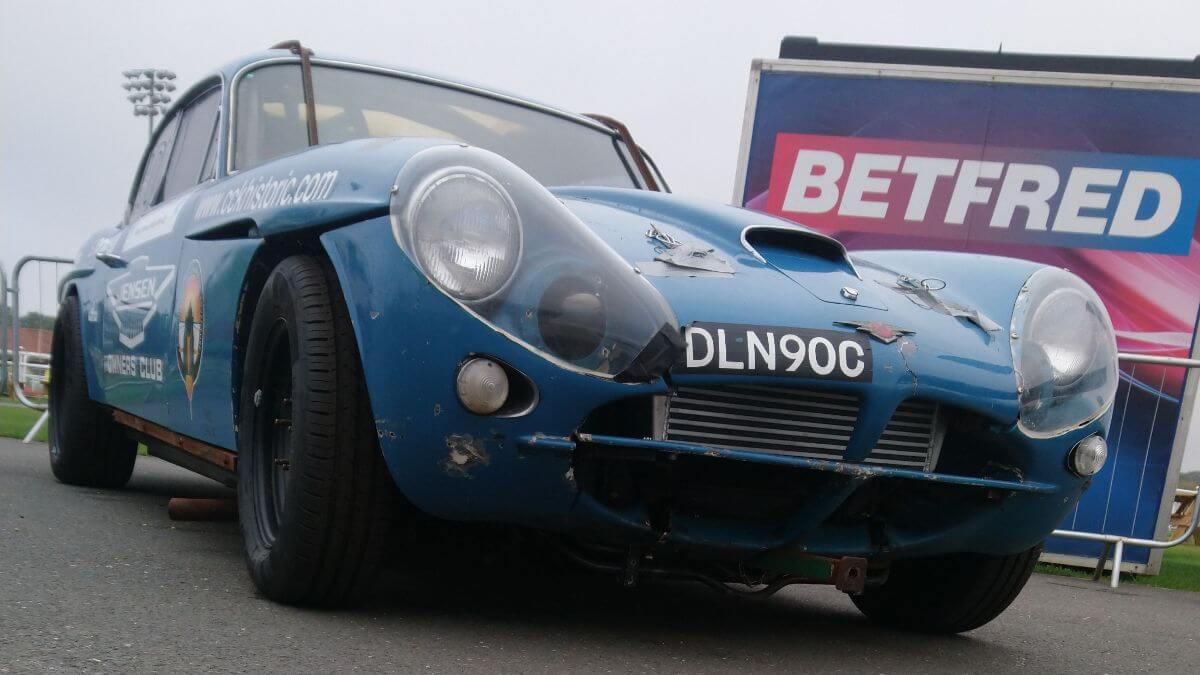 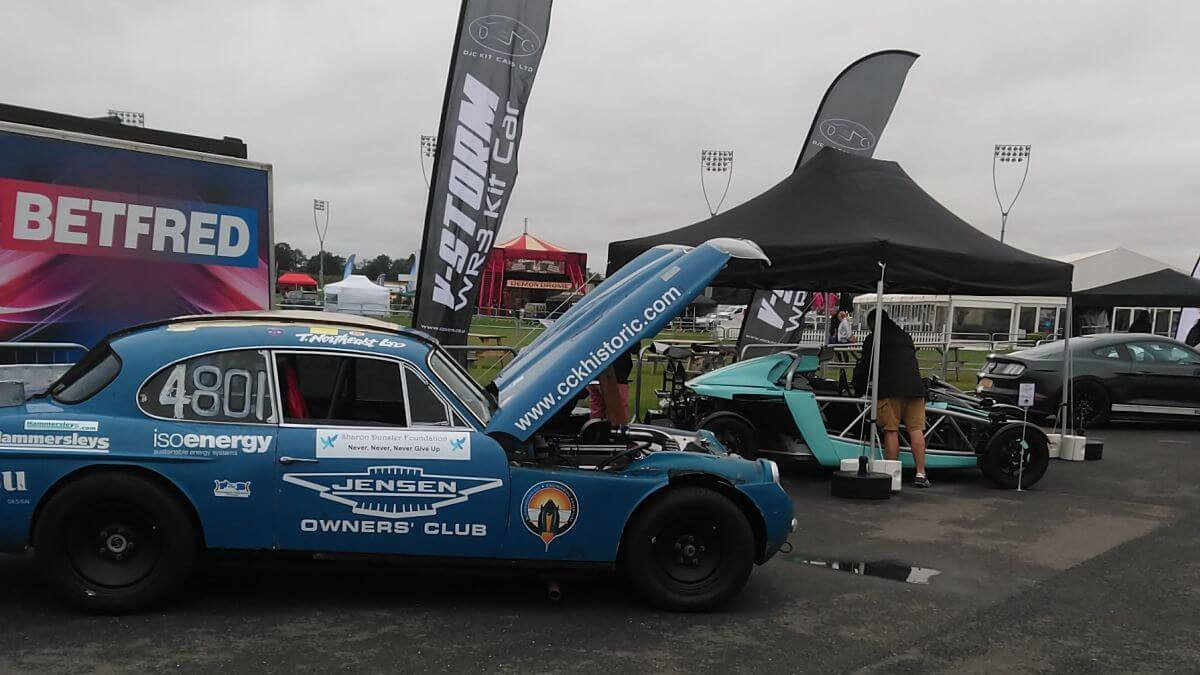 The show ended on Sunday afternoon and once loaded we broke camp and headed back to base. Pete and Ian had a fairly easy run back and arrived back in Horley in time to put the car in the workshop and return the trailer to Jason at Hammersleys. Once everything was back in it’s place we went straight to work. 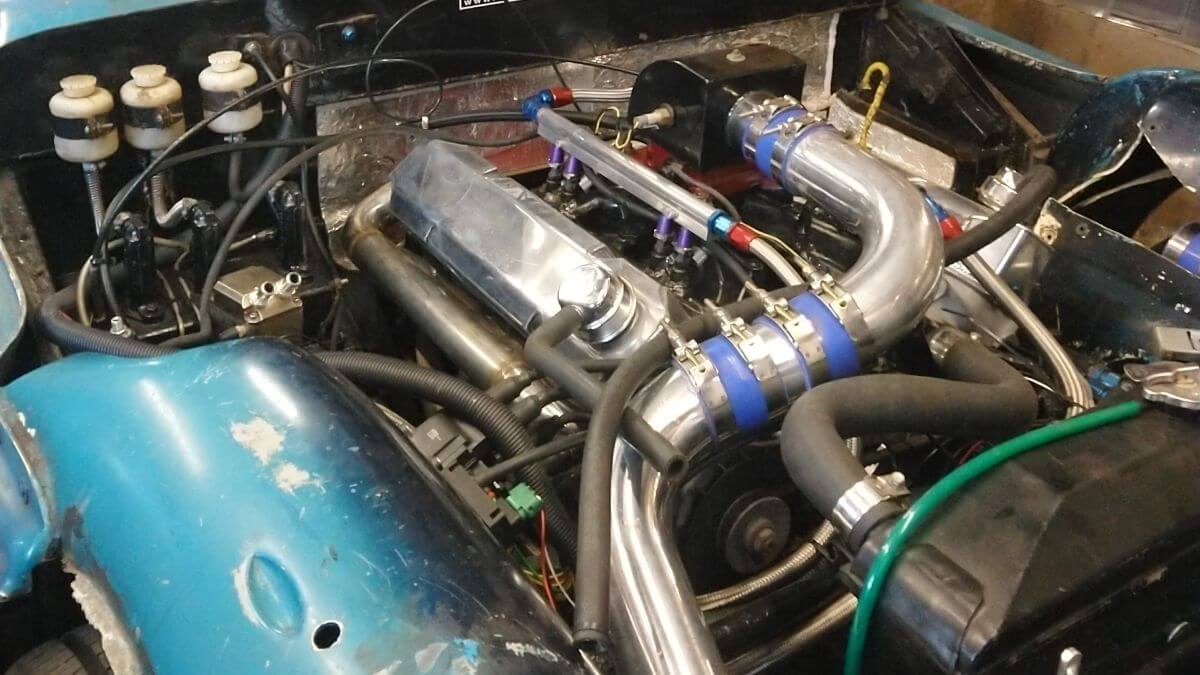 The first order of business is to get the turbocharger and all it’s associated plumbing routed and in place. Harry and Ian have been working steadily on this over the last few evenings as once again work committments have got in the way. Once this is sorted we will be removing the engine in preparation for the new transmission and clutch assemblies. Once everything is realigned we will be replacing the engine and sourcing another propshaft. As soon as this is all sorted we should be running the car up to Norfolk for our first dyno runs and begin tuning. 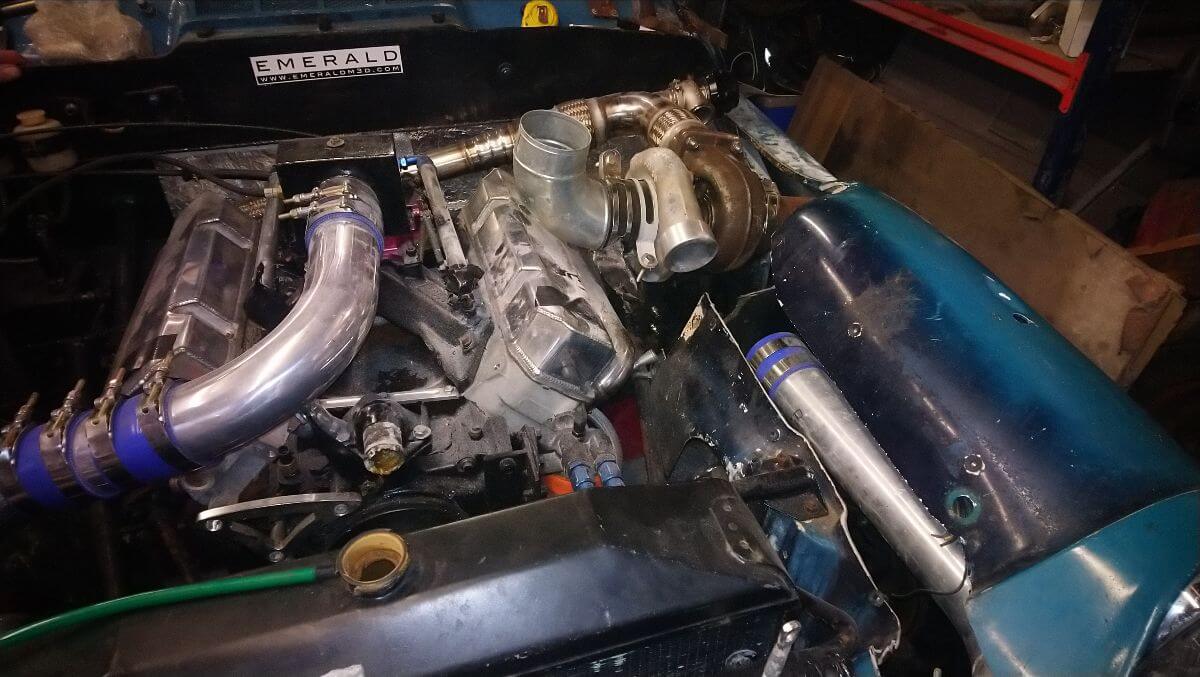